Teaching Alyssa to feed herself again.

Eight months ago Alyssa was unable to use her arms.  They were clenched to her sides and she didn’t seem to know what they were for.  She would not reach out, weight bare or do anything with them.  Our therapists from Medway Community Healthcare just kept telling us to make her weight bare and move things far away to encourage her to reach for objects, this was not working as she would not weight bare and didn’t know How to use her arms! She hated her arms being touched and would move out of side sitting.  Although our OT from MCH has been helpful in many ways, and trying his best, we seemed to be getting nowhere with actively using her arms. We was at a loss we didn’t know what to do so with Tree of hopes support we brought in a neuro OT.  This made a huge difference!


Our private OT Karen explained Alyssa felt unsafe and showed us different ways and techniques of helping Alyssa.  She explained to reach out you have to teach tiny increments, by holding her elbow and helping her reach further and further until she could do it alone.  She made us finger supports and tried various therapies.  Alyssa began reaching out with one hand, she began to accept smaller weight baring and tolerated us touching her arms.  Our private physio suggested constraint therapy as Alyssa’s brain was neglecting her left side.  The improvements from this were mind boggling, she began to reach and grasp with both hands.  So we decided to start trying to teach Alyssa to learn to feed herself again. 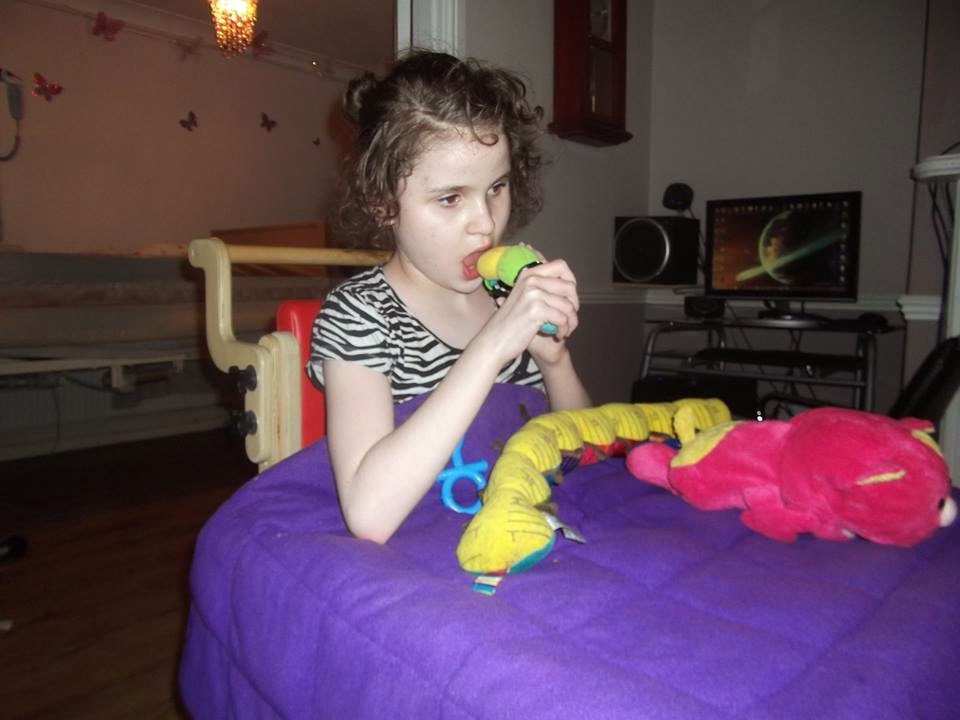 It was very hard at first as I had to physically hold a spoon and her elbows and guide her hand into the bowl, then her mouth.  With the support and guidance of Karen Alyssa began reaching out for wotsits.  She did so well Karen told us it was time to progress her to reaching for one wotsit on her tray.  I would guide her hand and she would independently pick it up and put it in her mouth.  With her eating from a bowl Alyssa figured out how to pull the spoon into and out her mouth so now I just guide her hand into the bowl.

We wanted Alyssa back on finger food and with the support of our dieticians we got prescription protein free food.  Although I could physically feed Alyssa a sandwich I knew she wanted to do it herself.  We began with bread, which crumbled so I toasted it.  She has done so well this week with her toast.  Today I gave her ciabatta and she shocked me by putting her hand in the plate and picking up one piece at a time and eating it alone with no help.  I was actually late filming this as she had had a whole plate of ciabatta she had already eaten.  She is now grasping her cup as I tip it to her mouth so that will be my next step.  This little princess astounds me with her determination and courage and we wanted to share her progress.  The video is below. 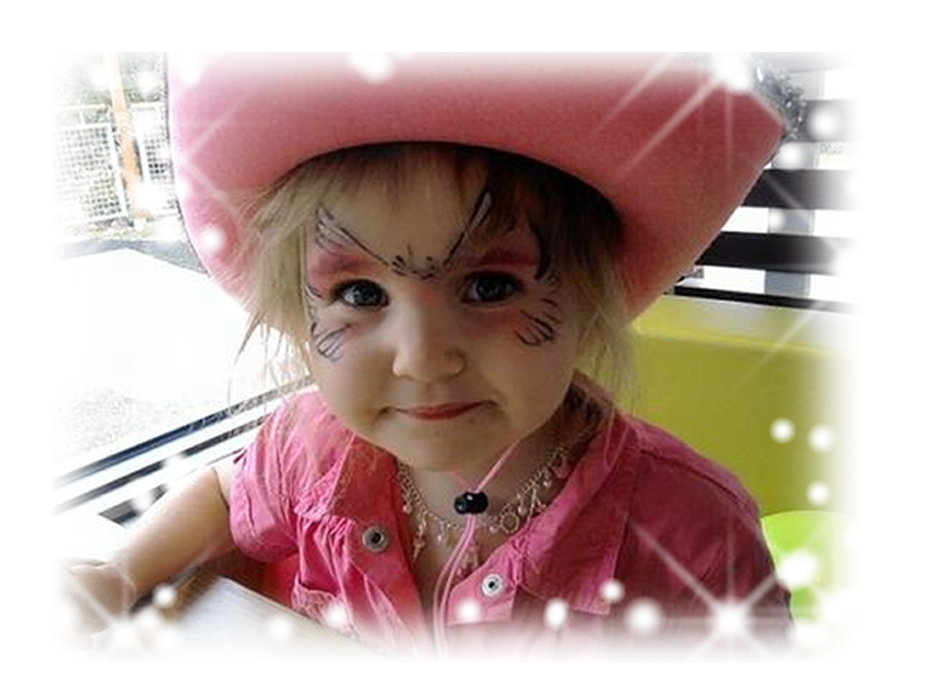 This New Year arrives with new hopes, this time last year Alyssa had already lost much of her therapy as Medway Community Healthcare children’s therapy had reduced it, to our surprise we found that there is no NHS neurological rehabilitation for children under the age of 16 years old. (there is for 16 and above)

When Alyssa was at the children’s trust in Tadworth for her short time we witnessed a whole accommodation which was closed because many Primary care trusts would not fund children so the reality is many children who suffer brain injuries never receive the neurological rehabilitation they need, we have witnessed poor little children who bodies have set and unable to move at all because they were returned to their local community’s and hospital without any adequate therapy.

Tadworth the children’s trust is for the fortunate few children who are lucky enough to get the funding,  draft NHS figures (The NHS’s draft service specification for paediatric neuro-rehabilitation, published in December 2012 ) reveal that around 40,000 children suffer brain injuries every year in the UK, acquired brain injury is defined as an injury to the brain caused by events after birth, rather than as part of a genetic or congenital disorder. Road accidents are a common cause of acquired brain injury in children and young people, but other causes include falls, assaults, meningitis, brain tumours and cardiac arrest.

Tadworth The children trust are only able to help a few hundred of those children each year and since there is no NHS neurological rehabilitation for children under the age of 16 the other children get an inadequate service for their needs.

Our daughter Alyssa who was only fortunate enough to get three months at Tadworth before our primary care trust took away her funding  was like many other children left to a service which isn't funded for neurological rehabilitation.

Our Medway Community Healthcare (Company number: 07275637 ) - Children's therapy who reduced my daughters therapy is a company that gets a set amount of the NHS commissioners ( Primary care trust ) who are basically paid a lot bean counters, so while my daughter goes without the therapy she’s needs from the NHS there are shareholders making a profit on of her back, its privatisation with the NHS paying minimal for the service meaning our children suffer. MCH Claims to be a community interest company yet In 2013, they made a post-tax “profit” of £1,679,520 on a turnover of £52,020,600 (up 5% from 2012) after reducing Alyssa’s therapy that she needed to gain any quality of life back which forced us to fund raise, showing they were maximizing profit for shareholders rather than having primarily social objectives.

Our Community Healthcare got stealthily privatised about two-three years ago, its most likely happened across the whole of the UK in many places,


How my daughter was denied that which she needed to just be able to move again or have any quality of life will be denied to anyone's child unfortunate enough to suffer from a brain injury across the UK, when they reduced her therapy telling us it was budgets they tried to cover themselves when we complained to the department by blaming our daughter saying it was because she wouldn't improve any more was the reason her therapy was reduced, of course without therapy she wouldn't recover so they were self-fulfilling, but luckily after the kind public donated enough so Alyssa could receive weekly private sessions which has helped improve her quality of life. 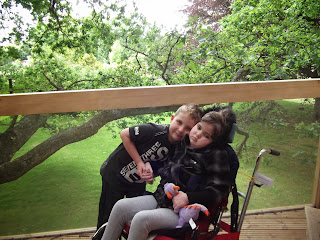 Medway Community Healthcare which is a private company now gets a set amount from our PCT (NHS) which they have to work within and profit from, if the Medway Community Healthcare say a child won't improve to justify reduction of therapy due to limited budgets the pct (NHS) support their decision because they have budgets to protect being the commissioners, the deal between them both works to benefit both and makes it very hard for the parents to fight against them and with the parents being traumatised as it is from what has happened to their child this makes them very vulnerable and easy  pickings.


Shown in the video MCH own Therapists admit no child in Medway gets more then 16 contacts a year, despite clinical need of the child, such as my daughter.